skip to main | skip to sidebar

As I said in a previous blog 6 years ago: If you don't fight you loose. Public resistance against the plans of big money has clearly weakened, and Woolloomooloo is again in sight of developers. People should look at these murals, study the history of the place and get energized again. See "What's next after Millers Point?" for what is at stake.
Posted by Matthias Tomczak at 11:06 PM No comments:

Today I received an email from an expat living in France who says: "Apart from my friends, there’s not much in the eastern suburbs of Sydney I miss these days, but that’s definitely one of the things which makes me homesick. Those murals still give me a great sense of hope." I did not intend to make people homesick with this blog, but that's the beauty of the web that no matter where you are you can connect with home.
The email gave me a reason to look at my blog again. I discovered that most of the links it contains don't work any more. That is a real shame; websites should not be so transient. But they are beyond my control, so I cannot help it. Anyone interested in the history of the green bans will just have to google it.
Posted by Matthias Tomczak at 5:37 PM No comments:

The murals are preserved and returned to their place

In a comment to my first entry (Welcome of 10 October 2008 - yes, it is that long ago) MIchael Gormly, editor of The City News, said that he would quote me in an article on the murals. His comment is dated 17 August 2009. It took me five months to check his article out, but here is the link. It contains more information on the history of the murals and on the conflict, reports on the conservation work recently done on those murals that were not lost, and even shows a model of the planned housing development that was thwarted by the Green Bans - a real eye opener! I recommend Michael's article to everyone.
Posted by Matthias Tomczak at 2:06 AM No comments:

The historical significance of the murals

There are quite a few murals in the inner Sydney suburbs. Some are just nice to look at (see the Surry Hills set on my Flickr page), others carry a political message, many come with a message and are nice to look at as well (see the "Newtown area graffiti and street art" page of Wikipedia).

The Woolloomooloo murals, which fall into the last category, are of historical significance because they document a historical confrontation between the coalition of big money and the state on one side and ordinary people and their organizations on the opposite side. The story has been told many times, so I give only a compressed summary.

Woolloomoolo is located at Sydney's waterfront and was traditionally a residential suburb for waterside workers, their families and the people serving the port and the local inhabitants. It adjoins Sydney's Central Bussiness District, which by the end of the 1960s had been filled with high-rise office buildings. Developers had started to look at expansion by buying up property in Woolloomooloo, in preparation of large-scale demolition, and were developing plans for more high-rise buildings. If successful, these plans would have led to a repeat of the story seen in so many cities around the world: Low-income working people would have been evicted and offered accommodation in depressing off-the-rack buildings in the outer suburbs.

By 1970 the local residents had formed an action group to prevent the destruction of the suburb. They raised their voices in vain; developers had the support of politicians who were ready to send the police with orders to enforce the laws of the market and the right of property owners. After much frustration the residents turned to the unions, who declared a "Green Ban" over the area, enforcing a stop of all demolition and building work. The developers tried to bring in non-union labour and the confrontation became violent, with the disappearance and presumed murder of journalist Juanita Nielsen (whose portrait can be seen on the Victoria Street mural). In the end the residents won, through the support of the Builders Labourers Federation (BLF) and the Federated Engine Drivers' and Firemen's Association of Australasia (FEDFA).

There is plenty of information on the web that recalls the history of the Green Bans. A small selection is given here:

Greenbans and beyond, a professional development website for teachers;
Green Bans: Campaigns to Protect the Environment, a history page of the Construction Forestry Mining Energy Union (CFMEU); (note added 17 January 2010: This page seems to have disappeared. The union is in the process of establishing a website section "Our proud past"; maybe that will be were it may turn up again.)
Green ban, the Wikipedia page about green bans.

The history how Woolloomooloo was saved provides an illuminating example of the way in which progress is achieved in today's society. The state and its political parties protect big money, which rules the country. The people have the right to cast their vote every few years; hopefully they do not realize that parliamentary democracy is only the modern way to secure the rule of the rich. Real progress – improvements in people's quality of life – comes about through direct popular action. More often than not this action requires the breaking of a few laws (which serve to secure the power of the rich) and leads to violent confrontation with state power.

But the law is not cast in stone. If the people are determined enough in their struggles the law has to follow public norms and amend itself accordingly. Reckless development is no longer acceptable today. In 1998 a Green Ban Park was inaugurated in Erskinville, another of Sydney's inner suburbs, on a site that was rescued from development. (See Green Bans, a PDF document of the CFMEU.) Jack Mundy, the key organizer of the green bans of the 1970s, received an Order Of Australia medal for his services to the urban and natural environment. Urban planners from all over the world visit Woolloomooloo as an example of good urban planning practice. How times have changed! But they will not stay like this forever; remember: If you don't fight, you loose!
Posted by Matthias Tomczak at 9:01 PM 1 comment:

So here they are: the photos of the Woolloomooloo murals. They were taken in October 1982 and digitized in October 2008. To see them all in larger just click on them; to download them in high resolution go to my Flickr page where you can find additional comment for each individual mural as well as the names of the designers and painters. (This information is also on the last mural below.) 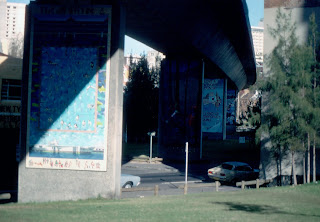 Above: The pylons of the railway overpass on which the murals were mounted. Below: The murals in detail. 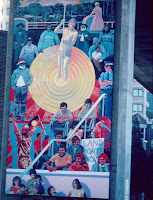 Welcome to this new blog about the Woolloomooloo murals. It has just been set up and is in its infancy stage. When it grows up it will have a collection of photos of the murals. Until then, here is an elementary description of the suburb's character, extracted from a description of walks: "Circular Quay to South Head and Clovelly; Connecting Walk C1: Woolloomooloo, the Domain to Kings Cross"

-------------
The area was subdivided from the 1840s and with its low lying land and proximity to the waterfront, it quickly developed a character similar to The Rocks. From the 1860s to the 1940s it kept a reputation for poverty, gang violence (the ‘Pushes’), prostitution and crime which stuck to the suburb despite the thousands of ordinary, hard‐working lives that were passed within its streets and tenements. A poor, mostly rental area on the edge of an expanding city, it became an easy target for urban redevelopment, or just plain urban degradation, from the early twentieth century on. Commercial and industrial intrusions, clearings, and plans for wholesale destruction and redevelopment left many houses boarded up, and most run down. Cheaper rent bought industry – motor garages, shipping companies, bakeries, hotels. Roads and railways were planned to slash through it – which in the 1970s happened when the Eastern Suburbs Railway slashed its way across the suburb. One of the positive legacies of that project is that the viaduct’s pylons have become a mural gallery of the suburb’s history. The Eastern Distributor had a similar impact, though less than it would have had if earlier, less tunnelled options been completed.

The main danger emerged at the end of the 1950s, 60s and 70s when government planning bodies and private developers were hard at work buying up properties and demolishing them or letting them rot, while developing plans for a high rise suburb of up to 40,000 workers and residents. Local residents – rarely owners themselves and never consulted – began to resist, but they were up against a powerful combination. By 1976, 40% of the houses that had been there 10 years before had been demolished, half the rest were empty and the population was down to a fraction of its former levels.

However, by then, the Green Bans and resident action resistance had had a critical (if short‐lived) ally, the Whitlam Government of 1972‐75. Saving the Loo had been an election promise and Urban and Regional Development Minister Tom Uren delivered. In June 1975 a three‐part agreement came into effect with the Commonwealth funding land acquisition and the State and Local Governments planning and managing the low density urban renewal Woolloomooloo Project. The project covered 13 hectares, included 750 or more dwellings and other facilities – about 75% of it public housing – made up of a mixture of restored or recycled older dwellings and compatible new buildings."
-----------------------
Posted by Matthias Tomczak at 5:19 AM 3 comments:

Civilizations of the World

Support Association for the Women of Afghanistan